We’ve put together a collection of the best Toyota Regius Van cars for sale in Kenya by dealers and individual sellers. All cars are genuine and all sellers are vetted. To buy the Toyota Regius Van, Visit: https://cars.topcar.co.ke/ 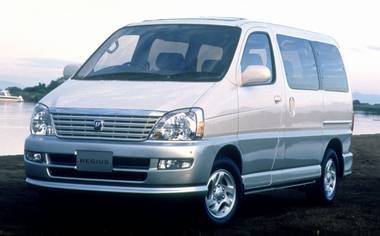 The Toyota Regius Van also known as the Toyota Hiace Regius is a minivan that  was entered production in April 1997. It is based on the Toyota Granvia platform but is smaller and lower in ranking. It is distinguished as either a wagon for carrying passengers or a van for carrying cargo.

One major distinguishing feature of the wagon is that all seats besides the driver and front passenger can freely be removed to create luggage space that is the same as that of the commercial van. Its production ended in 2002 and it’s longer available for import into Kenya. Alternatives you can consider in Kenya include, the Mitsubishi Delica D5, Toyota Noah, Toyota Voxy and Mazda Biante